Wolf Hall in the West

If you thought the glorious fabrics and hangings in the BBC adaption of Wolf Hall are merely copies produced solely for the drama then think again! There are still fabric companies in England who specialise in reproducing these archive weaves and who are meticulous in their attention to historical detail.

Companies such as Watts of Westminster and Stuart Renaissance Textiles (from our own corner of the West Country) weave faithful copies of early English and European fabrics, ranging from the Byzantine to the 19th Century period.

These rich, beautiful fabrics can be used for exquisite hangings and sumptuous upholstery and if you see yourself sitting on a sofa worthy of a Tudor monarch then how about upholstering one of our traditional Knole Sofas in the fabric woven for the Medieval Palace at The Tower of London or this Heraldic Beast fabric (from Stuart Renaissance) - one of our favourites.

We might be known for our traditional leather upholstery, but our furniture works very well in fabric (and we won't mention that Knole sofas were not created until about 60 years after Henry VIII met his end!)

Great Chalfield Manor and Lacock Abbey, both near Bath, and Montacute House and Barrington Court, in Somerset, are some of the key locations used in Wolf Hall. Barrington Court was once home to Stuart Interiors, whose beautiful panelling and joinery can be seen at the Leather Chairs of Bath showroom at 600 Kings Road in the Chelsea Design Quarter. 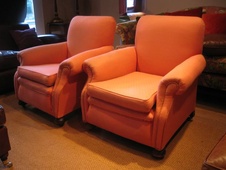