After years of fashion and design showing influences from the stunning sub-continent, it is wonderful to be able to return the tribute and produce our very own  hand made leather furniture for an Indian client who has clearly been inspired by our British traditional design.  The classic furniture is to be exported to Rokeby Manor, Mussoorie, in the foothills of The Himalayas, to grace an elegant stone lodge used in the summer months.  Mussoorie is not far from Shimla, from where the Raj governed when the heat of the plains became too much.
By coincidence, Nick and Sara Loxton of Leather Chairs of Bath had planned to spend Christmas in Delhi and Jaipur before the Indian clients discovered the shop and fell for the furniture.   What they hadn't expected when they reached Delhi was to find parts of the city still happy to recognise British design and style and the part it has played in their exciting history.  Delhi might be a thoroughly modern metropolis but there are clients who would still cherish sitting in a traditional British chesterfield when enjoying their G & T !
Rokeby was built in 1840 by Captain G.N. Cauthy and is one of the landmarks of Landour. The house and two acre estate are situated slightly above and to the east of St. Paul's Church and the old cantonment parade ground, which is now Char Dukan. Like many houses in Mussoorie, its name is taken from the writings of Sir Walter Scott, whose book-length poem describes heroic battles near the original Rokeby Castle in England. 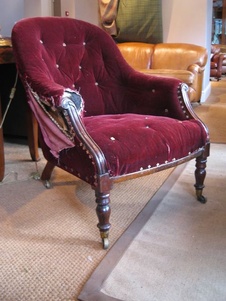